1.1- Overview
The Solanaceae, or nightshades, are an economically important family of flowering plants. The family ranges from annual and perennial herbs to vines, lianas, epiphytes, shrubs, and trees, and includes a number of important agricultural crops, medicinal plants, spices, weeds, and ornamentals. Many members of the family contain potent alkaloids, and some are highly toxic, but many cultures eat nightshades, in some cases as staple foods. The family belongs to the order Solanales, in the asterid group dicotyledons (Magnoliopsida). The Solanaceae consists of about 98 genera and some 2,700 species, with a great diversity of habitats, morphology and ecology.
The family has a worldwide distribution, being present on all continents except  Antarctica. The greatest diversity in species is found in South America and Central America.
The Solanaceae include a number of commonly collected or cultivated species. The most economically important genus of the family is Solanum, which contains the potato (Solanum tuberosum, in fact, another common name of the family is the "potato family"), the tomato (Solanum lycopersicum), and the eggplant or aubergine (Solanum melongena). Another important genus, Capsicum, produces both chili peppers and bell peppers.
1.2- Subfamilies
1- Subfamily Cestroideae (Synonym = Browallioideae)
2- Subfamily Goetzeoideae
3- Subfamily Nicotianoideae
4- Subfamily Petunioideae
5- Subfamily Schizanthoideae
6- Subfamily Schwenckioideae
7- Subfamily Solanoideae 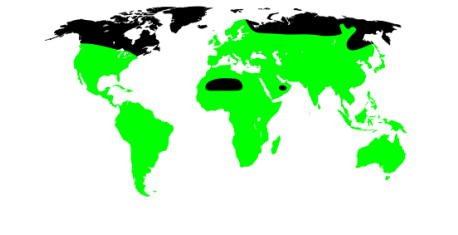 Map showing the distribution of the Solanaceae

3- The most important genera of the Family Solanaceae