1- Introduction to the Genus Hordeum - Barleys

1.1- Overview
Hordeum is a genus of annual and perennial plants in the grass family. They are native throughout the temperate regions of Africa, Eurasia, and the Americas.
Hordeum is a genus of 33 species that grow in temperate and adjacent subtropical areas, at elevations from 0-4500 m. The genus is native to Eurasia, the Americas, and Africa, and has been introduced to Australasia. The species are confined to rather moist habitats, even on saline soils. The annual species occupy seasonally moist habitats that cannot sustain a continuous grass cover.
One species, Hordeum vulgare (barley), is of major commercial importance as a cereal grain, used as fodder crop and for malting in beer and whiskey production. Some species are nuisance weeds introduced worldwide by human activities others endangered due to habitat loss.
Synonyms
Zeocriton Wolf
Critesion Raf.
Critho E.Mey. 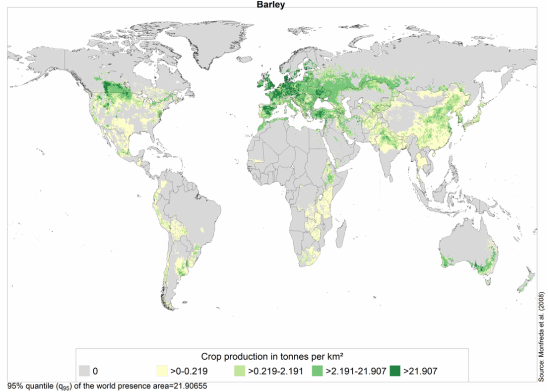 Barley map
1.2- History
Barley was one of the first domesticated grains in the Fertile Crescent, an area of relatively abundant water in Western Asia, and near the Nile river of northeast Africa. The grain appeared in the same time as einkorn and emmer wheat. Wild barley (Hordeum vulgare ssp.spontaneum) ranges from North Africa and Crete in the west, to Tibet in the east. The earliest evidence of wild barley in an archaeological context comes from the Epipaleolithic at Ohalo II at the southern end of the Sea of Galilee. The remains were dated to about 8500 BC. The earliest domesticated barley occurs at aceramic ("pre-pottery")  Neolithic sites, in the Near East such as the Pre-Pottery Neolithic B layers of Tell Abu Hureyra, in Syria. By 4200 BC domesticated barley occurs as far as in Eastern Finland. Barley has been grown in the Korean Peninsula since the Early Mumun Pottery Period (circa 1500-850 BC) along with other crops such as millet, wheat, and legumes.
In the Pulitzer Prize-winning book Guns, Germs, and Steel, Jared Diamond argues that the availability of barley, along with other domesticable crops and animals, in southwestern Eurasia significantly contributed to the broad historical patterns that human history has followed over approximately the last 13,000 years; i.e., why Eurasian civilizations, as a whole, have survived and conquered others.
Barley beer was probably one of the first alcoholic drinks developed by Neolithic humans. Barley later on was used as currency. Alongside emmer wheat, barley was a staple cereal of ancient Egypt, where it was used to make bread and beer.
Tibetan barley has been a staple food in Tibetan cuisine since the fifth century AD. This grain, along with a cool climate that permitted storage, produced a civilization that was able to raise great armies. It is made into a flour product called tsampa that is still a staple in Tibet. The flour is roasted and mixed with butter and butter tea to form a stiff dough that is eaten in small balls.
In medieval Europe, bread made from barley and rye was peasant food, while wheat products were consumed by the upper classes. Potatoes largely replaced barley in Eastern Europe in the 19th century.

2- Taxonomy of the Species Hordeum - Barleys

3- Biology of the Barley Plants

3.1- Characteristics of the barley grain
Barley seeds are approximately eight millimeters in length and weigh approximately fifty milligrams when mature, though there is a considerable range in these values between varieties. In most cases, the harvested barley grain includes the seed, a small structure called the rachilla, and both the palea and lemma, all of which adhere firmly to the seed. Barley grain in which these structures remain attached is referred to as covered barley, with the palea and lemma, collectively termed the hull. However, barleys in which the palea and lemma do not adhere to the seed are also well known. These hulless barleys share harvesting features similar to wheat, because when harvested the seed is cleanly separated from all other components of the spike.
The barley seed consists of the embryo, a series of outer layers of cells called the pericarp, and the endosperm. The endosperm contains different nutrients that the embryo draws upon as it grows into a plant. The principal compound found in the endosperm is starch, which represents about two-thirds of the mass of the seed. This starch serves as an energy source for the seedling. Another significant carbohydrate, the -glucans, are components of the endosperm cell walls. The second largest component of the barley endosperm is protein. The amount of protein present is generally inversely proportional to the amount of starch. This protein provides a source of amino acids that can be used for protein synthesis by the seedling. The amount of protein present in a seed is positively correlated with the amount of nitrogen fertilizer applied when the parent plant is being grown.
Additionally, the barley grain contains a large variety of other compounds present in minor amounts, including mineral nutrients and different organic compounds, including various vitamins.
3.2- Reproduction
Barley varieties are classified as spring or winter types, depending on whether they need a cold treatment, ranging from two to several weeks before making the transition to the reproductive phase of growth. When barley switches to its reproductive phase, the true stems of some of the tillers, called culms, elongate upward. The flowering structure, known variously as the spike, ear, or head, is borne upward, ultimately emerging from the "boot," which is the sheath of the uppermost leaf on the culm (the flag leaf). The height of a barley plant when the spike has emerged varies greatly, but averages approximately eighty centimeters. The spike consists of a large number of individual flowers called florets, which are present in individual spikelets that are attached to a central stemlike structure called the rachis. Spikelets are attached in groups of three on opposite sides of the rachis. The total number of spikelets on a spike varies, but averages approximately sixty. The awns are a notable feature of the spike. They are hairlike extensions that emerge upward from the lemma, one of two thin sheets of cells that surround the floret (the other is the palea). Awn length varies considerably among barley varieties.
Barley is also classified based upon the fertility of the florets on the spike. In six-rowed barleys, all of the florets are fertile, leading to six vertical rows of seeds on the spike. In contrast, in two-rowed types only the central floret of the three at each node is fertile, and thus just two rows of seeds develop on opposite sides of the rachis. The fertile florets consist of both male and female reproductive structures, and fertilization occurs as the spikes are emerging from the boot. Barley is thus predominantly self-pollinated. Between twenty-five and sixty seeds per spike are produced, and for spring barley the seed matures three to five months after planting.
3.3- Growth and development
The life cycle of the barley plant first begins with seed germination underground. The first visible sign of germination is root emergence, followed by the emergence of the cylindrically shaped coleoptile, which is the first structure to appear above ground. Interestingly, most above-ground tissues of the barley plant initially develop from the crown, a structure located below ground. The first leaf grows upward within the cylinder of the coleoptile, and emerges above the soil. This and other leaves do not expand along their entire length; rather the outer section (the blade) does so, while the base (the sheath) remains formed in a hollow cylinder. New leaves emerge in succession up through the sheaths of the older leaves.
The barley plant is not restricted to the development of one main stem, as observed in maize. Rather, like most other small-grain cereals such as wheat and rice, barley produces several additional secondary stems termed tillers that emerge up from the crown beginning a few weeks after the emergence of the main stem. The number of tillers produced varies depending upon the barley genotype and the environment. For instance, under highly fertile conditions, plants will produce more tillers than if nutrient starved.
Edited by Ho Dinh Hai
Long An – Vietnam