1- Introduction to the Species Typha orientalis - Bulrush or Bullrush 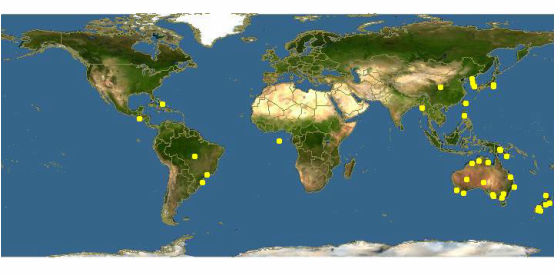 2- Characteristics of the Species Typha orientalis

﻿2.1- Description
+ Plant
Typha orientalis is a perennial growing to 3 m (9ft 10in) at a fast rate. It is a vigorous erect clump-forming perennial aquatic plant with spreading rhizomes.
It is found throughout New Zealand, Australia and Southeast Asia in shallow fertile waters of sheltered lakes and swamps and marshes with an underground stem (rhizome).
It is is a wetland plant that grows on the edges of ponds, lakes and slow flowing rivers and streams.
+ Stems
Stems are creeping, branched rhizomes with stiff, erect, leafy aerial shoots to 3-4 m tall, 10-30 mm wide at the base and occasionally up to 70 mm wide.
Flower stem 4-7 mm wide below the flower head. May reach a height of 4 m. Each stem produces one flower head.
New shoots that are produced in autumn grow slowly over winter.
+ Leaves
Typha orientalis leaves are grass-like with thick and spongy sheath at the base. Leaves in two rows on opposite sides of the stem. The uppermost leaves are overtop of the flowering head.
The leaves are long strap-shaped basal pale green in colour, alternate and mostly basal on a simple jointless stem that bears the flowering spikes. Leaves have its blade to 2 m long, to 30 mm wide. Upper leaves with sheath of the 2-4 uppermost leaves are usually distinct auriculate.
+ Flowers
The plants are monoecious with unisexual flowers that develop in dense  racemes (individual flowers are either male or female, but both sexes can be found on the same plant).
In spring to early summer an erect spike is formed bearing tightly packed clusters of single-sex flowers, the male above the female. Inflorescence with male and female spikes separated by 0-5 cm.
The numerous male flowers form a narrow spike at the top of the vertical stem. Each male (staminate) flower is reduced to a pair of stamens and hairs, and withers once the pollen is shed. Male florets are naked and separated by hair like bracts. Flowers on male spike fall off with age.
Large numbers of tiny female flowers form a dense, sausage-shaped spike on the stem below the male spike. Female spikes are velvety and buff-coloured at first but later matures to dark brown or almost black due to colour of stigmas. Each spike is 100-310 mm long by 10-30 mm diameter when mature. Female spike releases a fluffy mass of seeds at maturity.
The flowers are pollinated by wind. Seedlings can flower after 6 months. It is in flower from May to August, and the seeds ripen from Jun to September.
+ Fruits
After pollen release the spike bearing the male flowers withers and the female flowers give rise to tiny fruits. Numerous silky hairs ('down') become packed around each fruit to produce the familiar furry brown, cylindrical seed heads.
Fruit is dry, single chambered capsule that breaks off with the stigma and the short hairy pedicel still attached.
+ Seeds
The seeds are minute, 0.2 millimetres (0.0079 in) long, and attached to fine hairs. When ripe, the heads disintegrate into a cottony fluff from which the seeds disperse by wind.
There are 222,000 seeds per spike or 6,000,000 per square metre.
Seeds germinate from December to April in mud or under water.
They germinate in high temperature, low oxygen, high light conditions. Seedlings also require high light conditions. Therefore there is little germination or establishment in thick stands.﻿
2.2- Origin and Distribution
+ Origin
The genus Typha orientalis is native to eastern and south-eastern Asia (i.e. eastern Russia, China, Japan, Taiwan, Vietnam, the Philippines and Papua New Guinea), Australia and New Zealand.
+ Distribution
Species Typha orientalis is widespread in Asia, Australia, and New Zealand.
It can be found in Australia (all 6 states plus Northern Territory and Norfolk Island),  New Zealand (including the Chatham Islands and the Kermadec Islands), Vietnam, Malaysia,  Indonesia,  Japan,  Korea,  Mongolia, Myanmar,  Philippines, China and the Russian Far East (Sakhalin  and  Primorye).
2.3- Biological characteristics
+ Ecology
- Climates
Typha orientalis has been found in a tropical climates of Oceania and Asia on humid coastal and wetland soils. It cannot grow in the shade.
- Soil
It prefers wet soil and can grow in water.
It grows where soil remains wet, saturated or flooded most of the growing season, in shallow freshwater and occurs in slightly blackish marshes. It prefers soil with high amounts of organic matter and can also grow on fine texture mineral soils.
It is suitable for many kinds of soils: light (sandy) soils, medium (loamy) soils and heavy (clay) soils.
It is suitable for pH: acid, neutral and basic (alkaline) soils.
+ Organism type: aquatic plant
Typha orientalis  is an "obligate wetland" species, meaning that it is always found in or near water. The species generally grows in flooded areas where the water depth does not exceed 1 meters (3 feet).
Typha orientalis are among the most common of all aquatic plants. They are often a nuisance but also perform an important function in keeping a lake healthy by filtering the runoffs. Typha latifolia form dense monocultures when there is a wetland disturbance. They can reach up to 3 to 4 metres and grow prolifically from thick underground rhizomes, forming dense rhizome mats and litter which has an impact on species diversity by alteration of habitat. Dense Typha latifolia growth and litter may reduce the opportunity for other plants to establish or survive.
However, it has also been reported growing in floating mats in slightly deeper water. Typha orientalis grows mostly in fresh water but also occurs in slightly brackish marshes. The species can displace other species native to salt marshes upon reduction in salinity. Under such conditions the plant may be considered invasive, since it interferes with preservation of the salt marsh habitat.

3- The Uses of Species Typha orientalis - Bulrush or Bullrush

3.1- Food Uses
The Typha orientalis plant was used as a food plant in New Zealand and Southeast Asia.
In New Zealand, the Typha orientalis plant was quite useful to Māori people. Māori also introduced this plant to the Chatham Islands.
+ The uses of stems
Young shoots can be eaten raw or cooked. It is used as an asparagus substitute.
Base of mature stem can be eaten when it is raw or cooked. It is best to remove the outer part of the stem.
Vietnamese people in Mekong Delta often take the young stems of Typha orientalis plants to eat as vegetables with many recipes such as salad or pickled vegetables to eat and called "Bồn bồn".
"Bồn bồn" picking season starts from June to November (flood season). Every season of "Bồn bồn" Vietnamese people choose fresh part of the young plants (stem, leaf, root) cooked with many delicacies.
"Bồn bồn" is a clean vegetables, have high economic value, the more farmers to develop household economy. Products of "Bồn bồn" were sold nationwide, mostly consumed in the gourmet restaurant and in the feast.
In the South Western area of Vietnam, everyone likes to eat pickled vegetables from "Bồn bồn" with natural perch fish braised also like to eat this vegetables cooking in the hotpot, or cooking it with fried shrimp, fried meat ... Nowaday the rural types of this food are also serviced in the restaurants and hotels as rustic dishes but highly favored customers.
+ The uses of roots
Roots can be eaten raw or cooked. They are usually peeled before use.
The roots can be boiled and eaten like potatoes or macerated and then boiled to yield a sweet syrup.
They can also be dried, ground into a powder and then used as a thickener in soups etc or added to cereal flours. Rich in protein, this flour is used to make biscuits, bread, cakes etc.
The root contains a lot of fibre. One way to remove this fibre is to peel lengths of the root that are about 20 - 25cm long, place them by a fire for a short while to dry and then twist and loosen the fibres when the starch of the root can be shaken out.
+ The uses of rhizomes
The rhizomes were cooked and eaten, while the flowers were baked into cakes.
+ The uses of flowers and seeds
- The uses of flowering stems
Young flowering stem can be eaten after cooked. It tastes like sweet corn. It can be made into a soup.
- The uses of pollen
Pollen can be eaten raw or cooked.
A protein rich additive to flour used in making bread, porridge etc. It can also be eaten with the young flowers, which makes it considerably easier to utilize. The pollen can be harvested by placing the flowering stem over a wide but shallow container and then gently tapping the stem and brushing the pollen off with a fine brush. This will help to pollinate the plant and thereby ensure that both pollen and seeds can be harvested.
- The uses of seeds
Seeds can be used after cooked.
The seed is rather small and fiddly to utilize, but has a pleasant nutty taste when roasted.
An edible oil is obtained from the seed. Due to the small size of the seed this is probably not a very worthwhile crop.
3.2- Medicinal Uses
The pollen is astringent, diuretic, emmenagogue, galactogogue, haemostatic.
The dried pollen is said to be anticoagulant, but when roasted with charcoal it becomes haemostatic. It is used internally in the treatment of kidney stones, haemorrhage, painful menstruation, abnormal uterine bleeding, post-partum pains, abscesses and cancer of the lymphatic system. It should not be prescribed for pregnant women. Externally, it is used in the treatment of tapeworms, diarrhoea and injuries.
The Maori people used the long narrow leaves as a bandage around wounds and broken bones. The down that develops as the seeds ripen was also used to provide a protective covering on open wounds.
A gruel made from the rhizome was used to feed invalids. The roasted rhizome is also a strong laxative.
3.3- Other Uses
﻿﻿﻿ The stems with leaves of Typha orientalis plant have many uses.
In New Zealand, they were used for roofs and walls and occasionally for canoe sails.
Beside of using to make a good thatch, it can be used in making paper, can be woven into mats, chairs, hats etc.
They are a good source of biomass, making an excellent addition to the compost heap or used as a source of fuel etc.
A fibre obtained from the leaves can be used for making paper. The leaves are harvested in summer, autumn or winter and are soaked in water for 24 hours prior to cooking. The fibres are cooked for 2 hours with soda ash and then beaten in a ball mill for 1½ hours. They make a green or brown paper. A fibre is obtained from the blossom stem and flowers. A fibre obtained from the roots can be used for making string. The hairs of the fruits are used for stuffing pillows etc. They have good insulating and buoyancy properties and have also been used as a wound dressing and a lining for babies nappies…
The stems can be used to make rush lights. The outer skin is removed except for a small strip, or spine, running the entire length to give stability. The stem is then soaked in oil. The pollen is highly inflammable, it is used in making fireworks etc.﻿﻿﻿
Edited by Ho Dinh Hai
﻿﻿﻿Long An - Vietnam﻿﻿﻿