1.1- Overview
Sea vegetables are seagrasses and seaweeds used as vegetables.
+ Seagrasses
Seagrasses are flowering plants (Division Angiospermae) belonging to four plant families (Cymodoceaceae, Hydrocharitaceae, Posidoniaceae, Zosteraceae), all in the order Alismatales (in the class of monocotyledons), which grow in marine, fully  saline  environments.
These unusual marine flowering plants are called seagrasses because in many species the leaves are long and narrow, grow by rhizome extension, and often grow in large "meadows", which look like grassland: in other words, many of the species of seagrasses superficially resemble terrestrial grasses of the family Poaceae.
Seagrasses get their energy from photosynthesis - converting sunlight into energy - and so must live in shallow water touched by the sun. There they grow into lush meadows not just by reaching blades upwards, but also stretching their roots down and sideways. Many stems in a meadow are a single plant, connected underground by their roots in what’s known as a rhizome root system. In some seagrass species, a meadow can spring up from a single plant in less than a year; in slow-growing species, it can take hundreds of years.
Since they are true flowering plants (angiosperms), seagrasses reproduce by pollinating flowers and sending out seeds. Male flowers release pollen into the water that often collects into stringy clumps and, moved by the waves, runs into and fertilizes female flowers. Just like land plants, these flowers develop into seeds, which can float many miles before they settle onto soft seafloor (a few species can settle on rock) and germinate into a new plant.
Many species of seagrasses have been used for food to animals and people. Example some species of the genus Zostera.
Zostera (marine eelgrasses) has been used for food by the Seri tribe of Native Americans on the coast of Sonora, Mexico. The rhizomes and leaf-bases of eelgrass were eaten fresh or dried into cakes for winter food. It was also used for smoking deer meat. The Seri language has many words related to eelgrass and eelgrass-harvesting. The month of April is called xnoois ihaat iizax, literally "the month when the eelgrass seed is mature".
+ Seaweeds
Seaweed refers to several species of macroscopic, multicellular, marine algae that live near the seabed (benthic).
The term includes some members of the red, brown, and green algae. Seaweeds can also be classified by use (as food, medicine, fertilizer, filtration, industrial, etc.). The study of seaweed is known as phycology.
Edible seaweeds are Macro algae that can be eaten and used in the preparation of food. It typically contains high amounts of fiber and they contain a complete protein. They may belong to one of several groups of multicellular algae: the red algae, green algae, and brown algae.
Edible seaweeds are also harvested or cultivated for the extraction of alginate, agar  and  carrageenan, gelatinous substances collectively known as hydrocolloids or phycocolloids. Hydrocolloids have attained commercial significance, especially in food production as food additives. The food industry exploits the gelling, water-retention, emulsifying and other physical properties of these hydrocolloids.
Edible seaweeds are also called as Sea vegetables. Sea vegetables are seaweeds used as vegetables.
Most edible seaweeds are marine algae whereas most freshwater algae are toxic. Some marine algae contain acids that irritate the digestion canal, while some others can have a laxative and electrolyte-balancing effect.
The dish often served in western Chinese restaurants as 'Crispy Seaweed' is not seaweed but cabbage that has been dried and then fried. 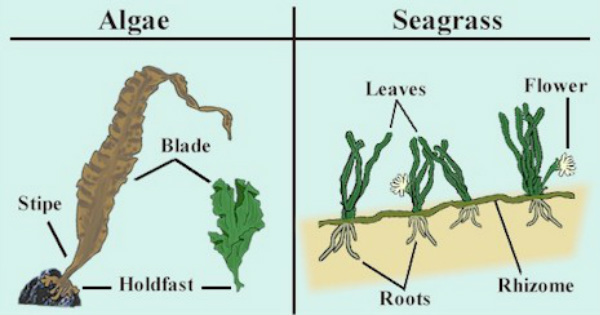